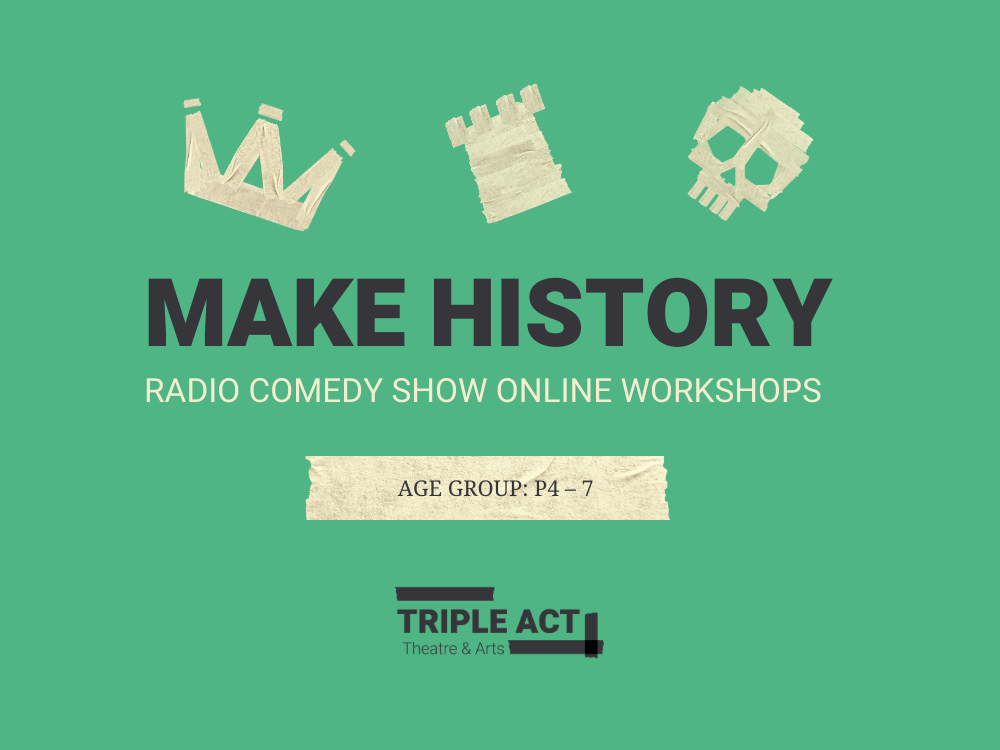 We are thrilled to offer a week-long online workshop with theatre professionals Jordanna O’Neill and John Kielty.

How well do you really know our history?

Get ready to travel through time and hear it like never before! Meet Kings, Queens, Witches, Fairies, heroines and villains! We will devise a fast paced, sketch based, full length radio comedy show inspired by Scotland’s funniest and darkest tales; featuring sound effects, cinematic score and and visuals – to be streamed to audiences in Spring 2021.

The workshop will run Monday 12 April – Friday 16 April as a 3-hour session every day, during which time participant will rehearse and then perform the radio play at the end of the week.

Participants in the week-long workshop are also invited to attend two development workshops via Zoom on the following days/times:

JOHN KIELTY is an Actor, Writer and Composer based in Linlithgow.  He has written many theatre scores and last year wrote A to Z of Dundee for Dundee Rep’s 80th Anniversary Season, the Oran Mor Summer Pantomime Dracula ReVamped and also Co-wrote, Directed and Musically Directed the Toonspeak Summer Show Time Oot.  He has written and contributed to many award-winning musicals with his Brothers, including Glasgow Girls for NTS and, in 2014, wrote the opening number for the Glasgow Commonwealth Games.  Their award-winning musical Wasted Love was last year adapted as a TV Pilot for Amazon Prime and he is busy adapting another – The Edinburgh Seven – with screen writer Raymond Friel and Jordanna O’Neill.  He has written scores for the Royal Lyceum, Oran Mor, His Majesties Aberdeen, The Citizens, National Theatre of Scotland, Unga Klara (Sweden) Pepperdine University (California) The Powerhouse (Brisbane) and Cumbernauld Theatre.  He worked in Pop Music in 2003 and co-wrote David Sneddon’s Debut, Top 5 selling Album Seven Years Ten Weeks.  He is currently working in voice over for the Game Industry and is songwriter for the Zetland Sings Project in Grangemouth (Falkirk Council) and the Paisley Radicals Project (Civil Disobedience/Star.)

JORDANNA O’NEILL trained in European Theatre Arts at Rose Bruford (London), Physical Theatre at Instatute Del Teatro (Barcelona) and completed an M.Res in Creative Practices at Glasgow School of Art.  Jordanna also trained with Song of The Goat (Poland) and Obra Theatre(France).  Jordanna was co-founder and director of the award winning Filskit Theatre company from 2009-2012 and has worked as a performer, director and choreographer with some of Europe’s leading contemporary theatre companies including Horse & Bamboo, Zu-Uk, and Shunt. In 2015, she created and directed the Scottish tour of Forsaken with Cumbernauld Theatre. In 2016 she directed the sell-out promenade production This Won’t Hurt a Bit based on the life of Sir James Young Simpson. In 2017 she created a large scale multi-venue production A Cabaret of Pestilence (Scottish Story Telling Centre, Digit2017!, Mercat and Surgeons Hall Museums).  In 2019 she developed and Directed Go Home and Sit Still for Surgeons Hall Museums and is currently in developing with a new musical The Edinburgh 7 with writer and composer John Kielty and Aria Entertainment.  Jordanna has extensive experience working in arts education and has worked as a lecturer and facilitator for organisations including Glasgow School of Art, Edinburgh College,  Edinburgh Acting School, Fife College, Summer Hall, The Lyceum,  Cumbernauld, Shetland, Borders and South London Youth Theatres.